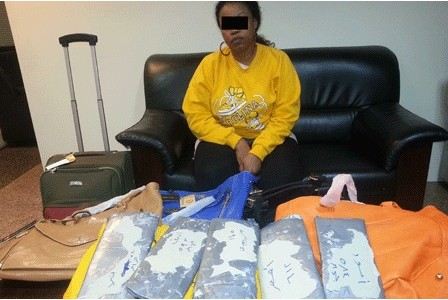 Photo of a woman caught with Dhs3 million of drugs (photo: Yahoo! News)

A cross-post from Yahoo! News — A woman caught with Dhs3 million of drugs in her suitcase claims she was unwittingly being used as a mule by her husband, Dubai Police said.

The Tanzanian woman was arrested at Dubai International Airport in transit to her home country from Brzail. She claims her husband arranged for her to go on a three-month trip to Brazil so that she could unwind.

However, she told officers that while on holiday, a friend of her husband asked her to take some bags back to Tanzania. She was arrested in Dubai after officers at theairport became suspicious of her behavior. They found 3kg of cocaine in herluggage, worth Dhs3 million.

“She claimed that her husband got her in trouble as he offered her a relaxing trip to Brazil and she went for three months. Her husband’s friend asked her to deliver the bags to her husband in Tanzania,” an official in anti-narcotics said. The suspect has been referred to public prosecution.