Africa Review: Tanzania must be a rich country to pay MPs so much 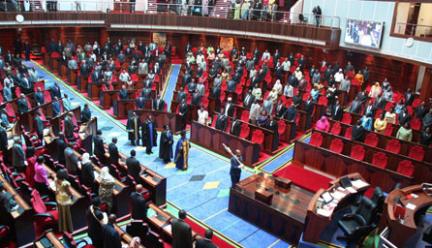 Tanzania Parliament in session. It is bloated and expensive.

There is an infographic available on the Internet that seeks to illustrate the relative financial burden of politicians across countries.

Specifically, it compares the incomes of politicians with the GDP per capita of their fellow countrymen. A number of years ago Kenya made international news by forging new ground in this area.

Using data from 2011, the infographic showed that Kenyan politicians have awarded themselves a salary that is 97 times the GDP per capita.

Tanzania’s politicians, on the other hand, have had to keep up a facade of humility and egalitarianism, which must undoubtedly irritate them. Socialist hangovers are no joke.

Of course, beneath the well-tailored short sleeved suits that have evolved from simple cotton to whatever that shimmery stuff is, behind the speeches that begin with the term “Comrade,” we have been watching the political class get undeniably richer.

Which means that really, it was only a matter of time before the prosperity of our neighbours’ political classes would serve as an inspiration to us.

And so the news that this current crop of parliamentarians have awarded themselves a severance package of close to $100,000 is only shocking in the sense that we’re a country of people who aren’t used to knowing all that much about what kind of money our politicians make.

Also, that many zeros behind a dollar sign going to an individual makes us itchy somewhere in the vicinity of our political expectations.

If we were all given the ability to vote on our own salaries and severance packages, as parliamentarians obviously can, then who indeed wouldn’t go for the millions? Direct control over your income is the kind of temptation that can’t be resisted by regular folks, let alone elected representatives.

The question is, how did we end up with a political system with a gaping loophole like this, anyway? Our politicians literally hold the keys to the public kitty, and look what they have gone and done.

Something must be done about this for a number of reasons. First of all, there is proliferation. Seems like every year some region has been subdivided into two or three new ones, which implies that come election time we are probably going to be quite a few new constituencies.

At the moment, we’re up to three-hundred-plus MPs, which is already about one hundred and fifty too many, and they are each costing us something fierce between the salaries and allowances. Can we really afford more?

Then there is inflation. If this group of three-hundred-plus are willing to award themselves $100,000 then who is to say that the next intake of who knows how many gazillion won’t have the courage to award themselves two or three times as much? After all, when it comes to money, more is more.

Rumour has it that being a politician here is a very expensive and sometimes risky investment. The post-election period is always rich with colourful stories about hopefuls who sold everything they owned and maybe even a few things that they didn’t in order to sink all their assets into the chance to get elected.

All those printed T-shirts and sacks of rice and five hundred shilling notes distributed for naught, not to mention the other kinds of payments that can never see the light of day for legal purposes.

You can imagine the tragic endings experienced by those who don’t make it. Greed only explains some of the problem, the rest is just an aspect of belonging to a patronage system that is likely to force you to find creative ways to recoup your costs, like a big fat package at the end of your term.

Unfortunately, this is not a good time for us to see our politicians put their hands all over our public funds again.

Don’t these folks believe in spin-doctors? A move like this is going to raise the obvious questions: Just how poor or rich or whatever is this country anyway? How can we afford to pay parliamentarians that kind of money when we can’t seem to do anything halfway decent in the areas of public service that affect the quality of life of the majority?

As it is, the country is simmering with all kinds of dissatisfaction that the independent press is having a great time incubating — with reason.

We’re not reacting well to the experience of growing socio-economic inequality at all and have a healthy suspicion of the well-to-do, too many of whom seem to be paid from our taxes and donor-funded budget. Maybe we need to coin a term for our particular political principle: Contradictory development.

Comment by Mama Malaika on February 12, 2014 at 18:02
They're greedy pigs (politicians). New revolution from below is needed to change political-economic perspective in Tanzania. And all I can hope for, is the reform of hearts and minds of Tanzanians, this will encourage movements to rise up and toss out their elites.
The idea that there's steady growth in Tanzania is misleading, and it represents the abuse of economic concepts by corrupt politicians because a poor man/woman in Tanzania is much worse (poorer) now than even 40yrs ago when the government provided free education and free medical service