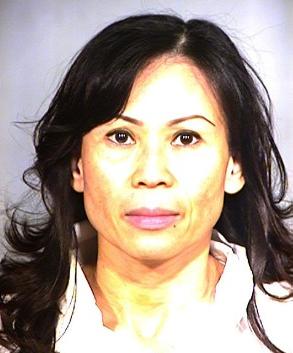 Los Angeles (CNN) -- A southern California woman convicted of cutting off the penis of her then-husband and throwing it into a garbage disposal was given a life sentence Friday with the possibility of parole after seven years, authorities said.

Catherine Kieu, 50, of Garden Grove, California, and her husband were going through a divorce at the time of the July 2011 incident. The couple married in December 2009, but in May 2011 the husband filed for divorce, which was granted in August 2011, according to Orange County court records.

Kieu laced her husband's dinner with the sleep medication Ambien after they had an argument over a friend possibly staying with them at a later date, the Orange County district attorney's office said in a statement Friday.

When the husband went to sleep, Kieu tied his legs and arms to the four corners of the bed, and when he awoke, she pulled down his pants and severed his penis with a knife, prosecutors charged.

Kieu then threw the severed penis into the garbage disposal, turned it on and mutilated it, prosecutors alleged. Kieu then called 911 about how her husband was bleeding, and he was taken to the hospital for emergency surgery, authorities said.

The victim's name has not been made public because he is a victim of spousal abuse, police said.

The ex-husband, 60, described the trauma in an impact statement during Friday's sentencing, according to a statement by the prosecutor's office.

"The convicted (person) viciously deprived me of part of my life and identity," the ex-husband told the court.

"Then, as is routine in cases of violence that involve something sexual, the victim must endure, at the hands of the defense, a second attack. This was a cruel and calculated violation of a person's body and mind. I now struggle with what is before me. She has torn off my identity as a man. She has caused doubt in my belief in good. She has betrayed my trust in people."

The Vietnam-born Kieu is also known as Que Anh Tran, court papers said. She and her ex-husband had no children, divorce papers said.

During the trial, Kieu's attorney said she suffered mental health issues, including depression, and the lawyer argued she shouldn't be found guilty, the prosecutor's office said.

The Orange County case was widely compared to the1993 attack against John Wayne Bobbitt by his then-wife, Lorena, who cut off his penis with an 8-inch carving knife while he slept.

Lorena Bobbitt then drove away, tossing the penis out her car window. The penis was eventually found and surgically reattached.

Lorena Bobbitt was later found innocent by reason of insanity. During her testimony, she tearfully described her life at the hands of what she described as her abusive husband.

In a separate trial, John Wayne Bobbitt was acquitted of sexually assaulting his wife. He later made adult films.