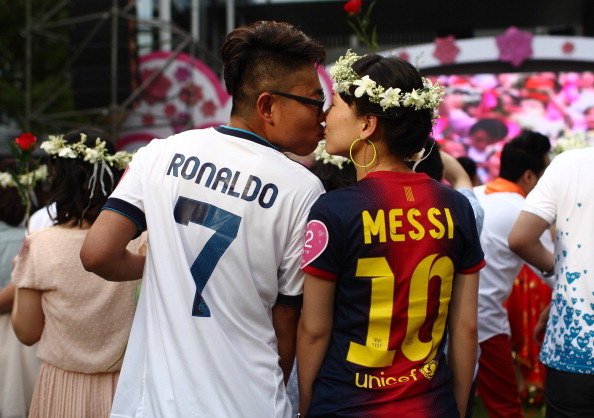 Chinese e-commerce company Alibaba (which is partnered with Yahoo!) held their annual group wedding for employees, where 688 couples were married. All of the couples included at least one employee of the company and about 81 couples were both employees. But only one couple (we think) married with the groom wearing a Cristiano Ronaldo Real Madrid shirt and the bride in a Leo Messi Barcelona shirt.

This shows that there really is hope for us all. If these two can get married in a mass wedding even though they're on different sides of the heated Ronaldo v Messi divide, can't we all put aside our differences and get along instead of arguing things that, in the end, don't really matter? Cristiano, what do you think?

every one has got freedom to DECIDE!!!

he he he heeeee