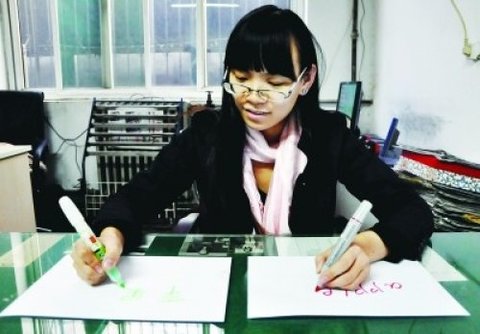 Chen Siyuan, a young translator from Handan, China’s Hebei province, has the incredibly ability to write with both hands at the same time. Even more impressive is that fact that she can write vertically with one hand and horizontally with the other, or in two different languages.

In this age of technology, writing with both hands is not as valuable a skill as it once was, but that doesn’t make 24-year-old Chen Siyuan’s ability any less remarkable. This young English translator has been wowing onlookers with her amazing talent of writing with both hands simultaneously, in two different languages (Chinese and English).

You’d be tempted to think this kind of unique capacity requires years of practice, but Chen says she discovered her ability completely by accident, during her high-school years. She was overwhelmed by the quantities of English homework, but found that she could complete respective tasks much faster by writing with both hands at the same time.

”When I was in high school, I unconsciously wrote with both hands while trying to finish my homework in a hurry,” Chen told People’s Daily Online. ”My classmates were curious and tried to imitate me, but none of them succeeded.”

Chen Siyuan says the first reaction of people who hear about her talent is disbelief. Then, once they actually see her doing it, they want to try it for themselves. The third reaction is always disappointment, as they realize it’s impossible for them to imitate her. In a time when most of us are starting to forget how to write with one hand, this remarkable girl can effortlessly do it with both.

Apart from her ability to write in two languages, she can write consecutive poetry verses on sentences in different directions (vertical or horizontal). “If you are writing just one Chinese character, perhaps it depends on your memory, but if you are writing a full article, or different articles, for instance simultaniously writing English and Chinese, I think it’s a matter of two-way thinking,” Chen told the BBC.