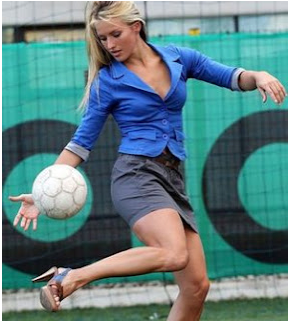 “I am the head coach and I have full liberty to create and plan the team’s tactics,” she told daily 24 sata (24 hours).

“The guys know the game, but there is a lot more to do,” added Nemcic, who has played for ten years for Dinamo Zagreb’s women’s team and the national squad.

Nemcic said that there was no reason why eyebrows should be raised in her getting the job.

“If a woman and a man have the same professional qualifications for a coaching job, I see no reason why I should not get into male football,” she said.

In 2008, Nemcic, a long-haired blonde, was among 15 finalists for Croatia’s Miss Sport. She said her players “listen to me and make no problems.”

“We are a great team and we all want to improve and reach the top of our league,” she said.