BEIRUT, Lebanon — More than a year after a young Tunisian set himself on fire and touched off revolutions throughout the Arab world, self-immolation, symbolic of systemic frustration and helplessness, has become increasingly common across the region.
On Wednesday, five young men self-immolated in Morocco, adding to the grim tally for a month in which others have set themselves on fire in Tunisia, Jordan and Bahrain.

“This is truly sad,” said Nabil Dajani, a professor of media studies at the American University of Beirut. “The governments are indifferent. And they still talk about democracy when there is a hierarchy of needs that should be addressed first.”

The death of Mohamed Bouazizi, a fruit vendor from southern Tunisia who set himself on fire on Dec. 17, 2010, helped incite an uprising that toppled the government of President Zine el-Abidine Ben Ali. But the repercussions of these recent acts have been far fewer.

Hardly anyone is paying attention. Arab newspapers and television have devoted little coverage to those who self-immolate. And the rise of the practice also illustrates how little the Arab revolts have changed the conditions that led to mass unrest in the first place. Economic conditions in much of North Africa and the Middle East are as difficult as before; indeed, in many places, like Egypt and Libya, they have grown worse.

This month, a 52-year-old pensioner in Jordan, facing crushing debt, burned himself to death. In Bahrain, where antigovernment protests have been crushed by force, a 59-year-old woman died Saturday after setting herself on fire on the roof of her building. Seven other people immolated themselves in Tunisia and Morocco.

The five in the Moroccan capital, Rabat, on Wednesday were unemployed university graduates, part of a national group called Unemployed Graduates. They had joined a protest of about 160 members of the movement who have been occupying an administrative building of the Ministry of Higher Education for the past two weeks.

Adil Sbaii, a 33-year-old spokesman for the movement, said the five men had threatened to set themselves on fire if the police did not let supporters, standing outside the building, bring the protesters food and medicine, as they had done every day for the past two weeks. The authorities, it seems, did not take their threat seriously.

“One of the guys who set himself on fire came out of the building, poured gas on himself and started threatening the police to let him pick up the bread brought by the others or he’d set himself on fire,” said Mr. Sbaii, who witnessed the episode.

He said he was not sure how or when exactly the first man burned himself but “all of a sudden the guy, as he was picking up the bread, was caught on fire, and then another one next to him, who had poured gas also on himself, was caught on fire as well.”

Three of the five were hospitalized, and two were reported to be in a serious condition. In a startling video, posted on YouTube, one man covered in flames is seen running amid a crowd of protesters and police officers. 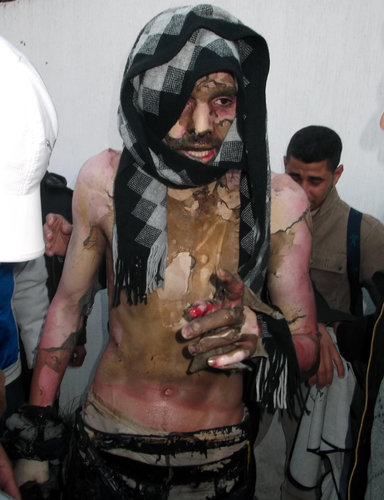 The official unemployment rate in Morocco is 9.1 percent nationally, but it is 16 percent for university graduates. The economy has been steadily growing in the last several years, but it is still unable to create jobs for many.

Morocco’s new elected government, dominated by Islamists who won at the polls last year, announced an economic plan on Thursday that would rely heavily on the private sector to create jobs for the millions who are unemployed, rather than provide government jobs, as many of the unemployed say they want. Some also have insisted on greater communication with officials. Morocco is a constitutional monarchy.

“We are asking the government to open a dialogue with these people and not lead them to despair,” said Samira Kinani, of the Moroccan Association of Human Rights in Rabat. “If there was transparency, the unemployed graduates would not react in such extreme ways.”

The self-immolations this month in Tunisia and Morocco came after several others across the region.

The BBC reported this month that 107 Tunisians tried to kill themselves by self-immolation in the first six months after Mr. Bouazizi’s death.

“The living conditions of so many have become miserable,” said Jihad al-Khazen, a columnist with Al-Hayat, a pan-Arab newspaper. “It is the result of desperation, and a feeling among many in the Arab world that their own lives have lost their value.”