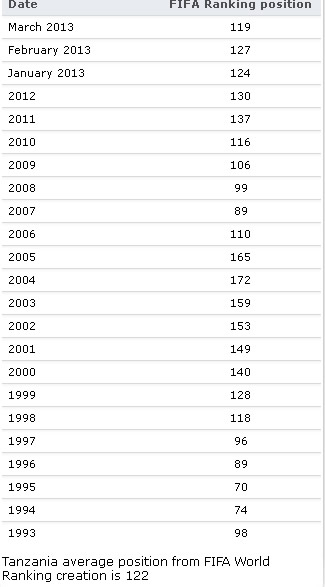 On the continent, Tanzania sits 33rd while Cote d’Ivoire, the biggest rivals in the group C of the 2014 World Cup qualifiers, still reign on top despite falling by one place.Stars next opponent in the qualifiers—Morocco — have also slipped three places to 77th position in the world ranking.

The Kim Poulsen’s men will host Morocco at the 60,000-seater National Stadium next Sunday.Tanzania fell out of the top 100 in 2009 and has since struggled to come back. The nation’s highest ranking was 65th in February 1995. In Cecafa region, Uganda continue to dominate the region even after dropping one place to position 85 while Kenya remained stagnant on 126th spotRwanda slipped two places to 132, Burundi (124, nine down) and Sudan suffered the worst fall following a 23-place plunge to position 127.

The ranking reveals very few changes in the upper reaches, with Spain continuing to hold a comfortable lead at the top over Germany and Argentina.However, Colombia have assumed outright sixth place on the global ladder – a position they shared with Portugal, who drop down a slot.

The main changes are to be found lower down the ranking, as the opening qualifiers for the AFC Challenge Cup 2014 in the Maldives have seen a number of teams earn an impressive number of points. Afghanistan has climbed 48 places to 141st on the back of victories over Sri Lanka (173rd, up 20) and Mongolia (178th, up 3) as well as a draw against Laos (168th, up 5).

The Afghans are now in their best-ever position and have qualified for the AFC Challenge Cup 2014 together with Palestine (150th, up 3) and Myanmar (155th, up 9).

Another team to have gained ground is India (143rd, up 24), even though they have not yet qualified for the Challenge Cup and are now relying on help from other teams in the remaining group matches.
A total of 18 ‘A’ international matches have been taken into account for the March edition.