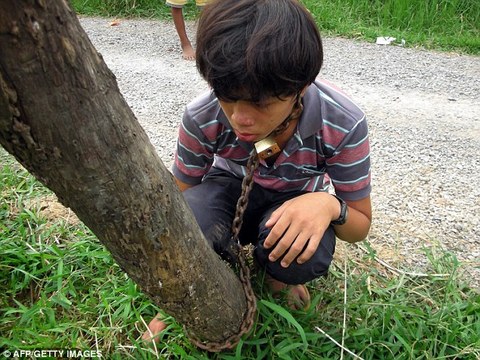 An angry Cambodian father punished his son for skipping school to play computer games by chaining him by the neck to a powerline pole.

Motorbike taxi driver Sok Thoeun, 40, spotted his son in an internet cafe in the northern town of Battambang playing online games when he should have been in class.

Mr Thoeun was so outraged he decided to 'teach his son a lesson' by publicly humiliating him by chaining him by the neck to a thick wooden powerline pole.
Mr Thoeun's punishment is similar to the ancient use of stocks, which immobilized its victims in a public place, exposing them to the scorn and ridicule of passers-by.

But the 13-year-old's public ordeal came to an end in less than two hours after neighbours alerted the police who brought in a locksmith to free the child.

Battambang deputy police chief Cheth Vanny said: 'The father was so angry when he found his son at an Internet cafe instead of at school that he chained him up in public for people to see to teach him a lesson.'

Mr Vanny added: 'He is still on the run. This kind of torture is not acceptable.'

Impoverished Cambodia's Internet usage rate is among the lowest in southeast Asia, with less than 1.5 per cent of its 14 million people listed as Internet subscribers in 2010, according to government statistics.

But as more Internet cafes have sprung up in urban areas in recent years, the popularity of online gaming has soared among the country's teenagers, most of whom have no Internet access at home.