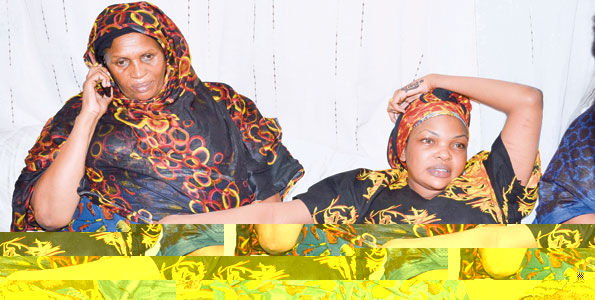 Miss Tanzania 2006 Wema Sepetu mourns the death of her father Isaac Sepetu at their Sinza home in Dar es Salaam, yesterday. With her is Mariam, her mother. The former minister died on Sunday at TMJ Hospital in Dar es Salaam and will be buried tomorrow in Zanzibar. PHOTO | SALIM SHAO

Dar es Salaam. Fallen diplomat Isaac Sepetu got poor support from the Zanzibar government when he was ill, his family said.

His wife, Mariam, told The Citizen that when her seriously sick husband was flown to Dar es Salaam from Zanzibar, attempts to get support from the government failed. “It was not supportive of us,” she lamented.

She said although President Ali Mohamed Shein was ready to assist with better treatment, the permanent secretary in the Zanzibar ministry of Health, Mr Mohamed Didawi, was not supportive.

Speaking to The Citizen over the phone, the Zanzibar minister of Health, Mr Juma Hamduni Haji, criticised Mrs Sepetu for not taking her concern to the President after getting a lukewarm response from the ministry. Mr Haji said she could as well have taken the patient to Muhimbili National Hospital. Mr Sepetu leaves behind two widows and nine children.

He died on Sunday at TMJ Hospital in Dar es Salaam after a battle with diabetes and high blood pressure, aged 70. He will be buried tomorrow at Mbuzini in Zanzibar.

His last-born, Wema, who was Miss Tanzania 2006, said: “We mourn the loss of a strong, loving, wise, social and supportive father. He loved us all equally.” Amani, his firstborn, said the father was admitted to TMJ

Hospital for 10 days and up to his death was a member of CCM and chairman of the Zanzibar Investment Promotion Authority.

Sepetu was a former Tanzanian ambassador to Russia and the Democratic Republic of Congo.